IVA Supports the Campaign for Disarmament. On Saturday the 24th of January 2014 we along with hundreds if not thousands of disarmament (anti-nuclear) protesters surrounded the ministry of defence (MoD) in Whitehall London. This was one of many protests across the UK since the government’s proposal to update its nuclear deterrent program ‘Trident’ which would include “four submarines which carry between 12 and 16 missiles, each of which can deliver a number of 100 kiloton warheads to individual targets” all capable of mass destruction on an unimaginable scale. 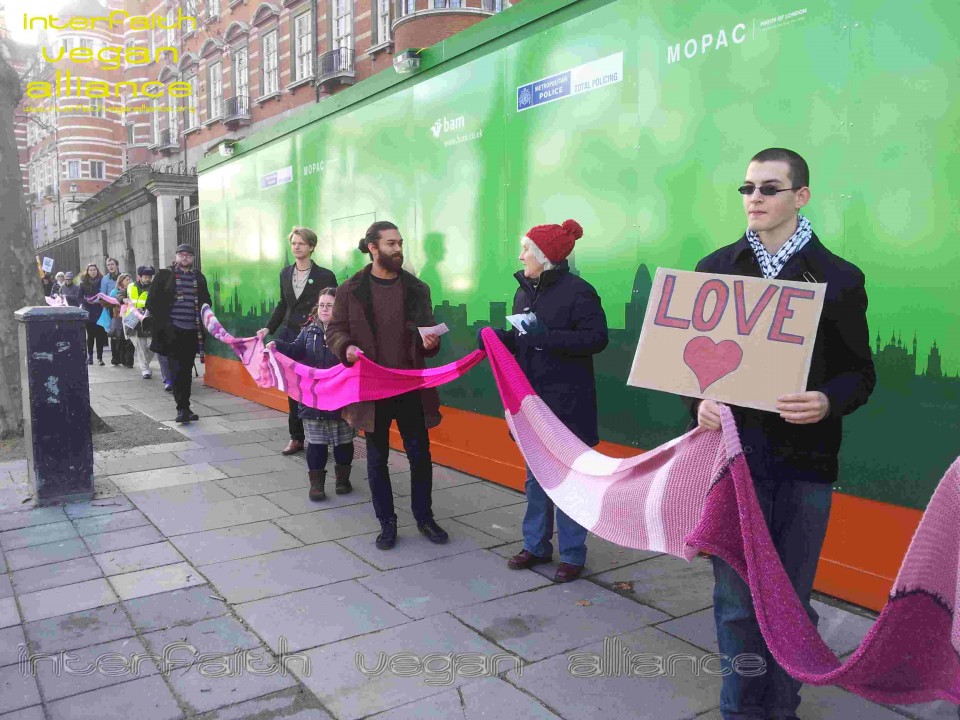 Moreover, it would cost the taxpayer more than three billion pounds. Any use such missiles (manufactured at the villages of Burgfield and Aldermaston near the English town of Reading), would almost certainly be illegal under international humanitarian law.

Now if the British government sees itself above humanitarian law and sees its people below it, then it is down to the people to oppose all offensive military activity as voting changes nothing and is more like an expression of conformity than a tool for democracy.

Nevertheless, representatives from various organisations were present speaking out against the governments ludicrous plans, Jeremy Corbyn was one of them, Kate Hudson of CND another. There is no justification for Trident was the gist. Current spending on nuclear weapons is around £3bn per year most of which comes from the tax payer & welfare cuts that have targeted some of the most vulnerable people living in the UK. There is clearly no place for trident in the 21st century, the same money could be used to…

…scrap student tuition fees for the next 30 years – saving students from a debt of up to £27,000 each. We could employ 150,000 new nurses and teachers every year for over 30 years. Or we could fully fund all A&E services in hospitals for over 40 years. Build 30,000 new homes every year, creating 60,000 new jobs in construction. Or we could quadruple our annual investment in renewable energy. (CND)

Campaign Against The Arms Trade

As with most arms trade deals trident is about shifting public money into private/corporate bank accounts and lining the wallets of the ‘filthy’ rich. Please sign the following petitions beginning with CND’s (Campaign for Nuclear Disarmament) scrap trident petition. Another well illustrated petition by CAAT (Campaign Against the Arms Trade) suggests that £100 billion should go towards tackling climate change. We are however at pain to show that there is something anyone could do to help bring climate change under control without even spending a penny. Simply Go Vegan! Over 50% of the world’s greenhouse gases come from animal production. Global warming could be eradicated by a global ethic, a change in diet. Moreover, plant based nutrition is harmless, affordable and carries many health benefits. CAAT have campaigned tirelessly to clean up the countryside by seeking an end to an American spying facility in the North of England, please sign this petition. A poem regarding this spying facility was written by Leeds legend johnny Solstice

Civil liberties are on the brink of extinction and it is up to creative minds to find alternative methods of effecting change. We salute any and every effort or action geared towards demilitarisation and disarmament of all weapons.

Then the wonderful Maya Evans toured the North lending her much valued inspiration, in particular she along with eight other activists scaled the roof of a UK weapons manufacturer that was until then supply the Israeli military. Thank you Maya at el. Thank you to all those who are inspiring others, creating opportunities for learning and taking affirmative action against the military industrial complex.