Fuel Poverty in the U.K.

“…those paying more than 10% of their income on gas and/or electricity to adequately heat up their homes..” (This figure is at least double for the majority of people affected).

Since the merging of the Conservative & Liberal Democratic Parties the UK has seen all manner of welfare cuts, tax increases and more privatisation of public services. The British government it seems is happy to invest ridiculous amounts of public money in nuclear ‘deterrents’ and counter-terrorism while seeking to instil fear in U.K. citizens. This simply exacerbates the difficult social conditions of the working class, exposing more families to poverty. Many of whom are faced with having to make decisions such as whether to spend what little they have on adequately heating their homes or on buying an adequate amount of shopping to see them through the week. Families are often having to sacrifice one for the other. Choose the former and they have little choice but to use food banks, or else be with hunger; or choose the latter and potentially freeze to death during the cold season. According to ‘Fuel Poverty Action’:

“…The UK is suffering the worst levels of fuel poverty in Western Europe, with one person dying of cold approximately every six seconds last winter. We’re all affected by this injustice, particularly those living the most precarious lives, including pensioners, young children, disabled people, the sick and ill, students and others on low incomes. In 2012/2013 over 10,000 people died of fuel poverty. Millions more of us struggled to pay our bills, top up our prepayment meters, and were bullied by our energy companies because we owed them money we couldn’t pay. For many people this meant going without heating or hot water during the winter, or it meant having our homes entered, without permission, by energy companies to install prepayment meters..”

Nevertheless, there are many groups and organisations trying to support those affected. However we’d like to see more groups formulating creative strategic direct actions with a view to obtaining services and rights for people affected by fuel poverty and the government’s attack on the welfare state. Please do not hesitate to contact R.E.A.L. if you or your group are interested in organising actions.

Climate change has been defined by the United Nations Framework Convention on Climate Change (UNFCCC) as:

“Warming of the climate system is unequivocal, as is now evident from observations of increases in global average air and ocean temperatures, widespread melting of snow and ice and rising global average sea level“

The Intergovernmental Panel on Climate Change (IPCC) warn that:

“severe and pervasive’ impacts of climate change will be felt everywhere“

They also suggest that a good adaptation measure would be to:

Most climate scientists now believe we must leave 80% of all fossil fuels in the ground to avoid soaring past 2 degrees of warming – and this isn’t the scariest scenario by a long way. If we don’t leave most of it in the ground our children and grandchildren will find themselves living in a planet straight out of science fiction. If you accept that argument, it weakens the case for all fossil fuel extraction, whatever the method! Remember the global effects we see at the moment reflect just a 0.8 degree rise so far.
Green House Gas Effect Some of the effects of climate change include increased frequency of earth quakes, flooding, cyclonic weather, spread of disease, and extinction of wildlife populations. The main cause of climate change seems to be the accumulation of green house gases (GHG’s) within the earth’s atmosphere/troposphere. GHG’s include carbon dioxide (CO2), methane (CH4), nitrous oxide (NO2) and fluorinated gases (F-gases). This accumulation of GHG’s creates a layer around the earth which allow sunlight in but absorbs the heat as it rebounds from the earth’s surface, this causes global warming and is known as the greenhouse effect.

The production of GHG’s primarily occurs in industrialised and developing countries engaging in the mass production and/or consumption of consumable goods. These activities usually depend on the burning of fossil fuels such as gas, coal, and oil to generate energy/power/electric, which in turn emit a large quantity of CO2 into the troposphere. As such, CO2 emissions have generally been thought to be the largest contributor to global warming as they account for the majority of GHG’s in the atmosphere. Subsequently, efforts to reduce global warming have focused on burning ‘cleaner’ sources of fuel to create energy and using devices to restrict that amounts of CO2 released when burning fossil fuels. Investment in generating and storing hydra, solar and wind power has also played a major part in attempts to reduce CO2 emissions. 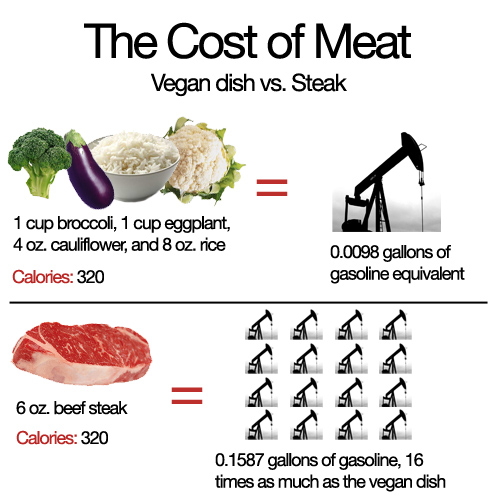 This is firstly because it turns out that most CO2 emitting machinery also emit gases that actually have a cooling affect on global temperatures which mean that concentrations of CO2 are not the primary cause of climate change. Whereas animal production actually contributes far more to global warming that the 18% previously suggested. In fact, leading scientists have argued that the figure may actually be more than 50% as animal production not only produces a high amount of CO2 but more significant is the amount of CH4 produced, which is at least 21 times more potent than CO2. Therefore, although reducing consumption of animal products may do more good for the environment than simply converting to ‘cleaner’ energies, the gains are still relatively small when taking the full extent of animal production into consideration. Therefore to ensure a significant reduction in climate change we must limit our dietary preferences to plant based sources of food and show others the importance of doing so, not only for the sake of the environment but a surge in good health runs synonymous with this change. Please click here to read a compelling case for this.

Even the IPCC suggests that “..substitution of low-carbon healthy alternatives reduce[s] ischemic heart disease (assuming replacement with plant-based polyunsaturates) and some types of cancer…” (For more health benefits please view the third video in the play list). Had we have been better placed to consider moral questions about the human animal relationship before now, global health would now be thriving. See our informative recipe guides for more information and some great cooking recipes, please feel free to download and share.